Our experts have been designing and prototyping trailers in several industries for over three decades. When you need an expert witness who understands the ins and outs of how trailers work mechanically, our experts are a great option.

Because of our experience in the trailer industry, our experts have been retained on numerous cases involving trailers.  These have ranged from decoupling issues to design issues and more. One of these cases involved a horse trailer that overturned into oncoming traffic in high winds. The manufacturer was being sued for designing a defective product and for not having adequate warnings displayed.  Our expert issued a report where he found that there were hurricane force microburst winds in the area on the day of the trailer overturn and that more likely than not the culprit of the overturn was one of these micro bursts that had overturned other trailers and downs a substantial number of signs the same day.  The wind was described by witnesses as “gusty” which would render a warning to not drive the trailer in certain wind conditions useless because “gusty” wind is not predictable.  He also showed brought several arguments that showed that the trailer functioned as it was supposed to and therefore, was not improperly designed. This case settled shortly after the report was issued.

We have assisted in all sorts of other trailer issues such as decouplings, overturns, trailer sway, braking issues, improper safety chains and improper attachment, just to name a few.

Because of how often they are used, and because of the fact that no training is required to use them, accidents involving trailers are extremely common. Trailer accidents can occur because the trailer is overloaded, because it is poorly loaded or because the vehicle towing the trailer is unfit for the job.  There are also a number of other reasons why trailer accidents happen, but the reality is that they happen on a daily basis.

Because of the nature of trailer accidents, they are often serious or even fatal. High speeds and large equipment are often involved which is a bad recipe when it comes to seriousness of an accident. 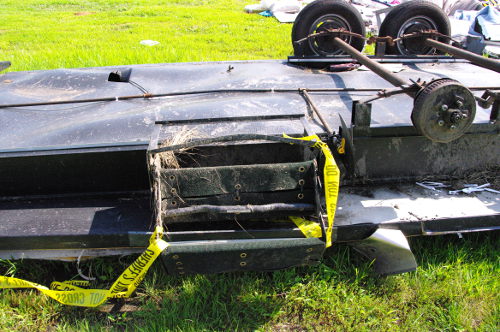 What to Look for in a Trailer Expert

A trailer expert should be familiar with the mechanical workings of trailers. Furthermore, they should have a sound understanding of what proper warnings should be displayed and the safety features that should be available for a trailer.

A trailer expert witness should have the ability to analyze the trailer in question to see if it is built sufficiently to hold the capacities that it is rated for.

Our experts can perform analyses to determine the structural integrity of equipment and provide opinions that are technically accurate, of the highest quality, scientifically supported and clearly presented.  Call Alpine Engineering and Design if you are in need of a trailer expert witness at: (801)763-8484. For more information about our experts click here.