Standards are commonly used in engineering design. Some standards are legal requirements while others are consensus or voluntary standards. There are a number of organizations that provide standards including the Occupational Safety and Health Administration (OSHA), the American National Standard Institute (ANSI), the American Society of Mechanical Engineers (ASME), and the Society of Automotive Engineers (SA) to name a few. ASME defines a standard as follows:
“A standard can be defined as a set of technical definitions and guidelines, ‘how to’ instructions for designers, manufacturers, and users. Standards promote safety, reliability, productivity and efficiency in almost every industry that relies on engineering components or equipment. Standards can run from a few paragraphs to hundreds of pages, and are written by experts with knowledge and expertise in a particular field who sit on many committees”

The committees that write and are responsible for standards are typically comprised of workers and experts from companies directly involved in the industry. Most standards are well-written, however, experts and layman alike understand that not every iteration of a product can be accounted for in a single standard. Thus, engineers and designers should use standards as a starting place.

Standards should be considered during the design process and can help determine the minimum requirements for products and the processes they cover. One maxim for product safety can be worded, if you don’t meet the minimum standard, your product isn’t safe. However, complying does not ensure a proper and safe design. At the end of the day, the manufacturer, not the standard committee, is responsible for producing a product that can be used safely and
effectively for its intended purposes.

Historically, safety has not been a priority for many companies and projects. It is said that as many as 400,000 people died building the Great Wall of China. During the construction of the Panama Canal, 25,000 workers lost their lives. And the Transcontinental Railroad claimed 1,200 of its 15,000 workers. Gratefully, safety has become more of a focus as society has progressed. In the United States there was a big push toward safety in the 60’s and 70’s. In 1966, the American Standards Association (ASA) identified needs for a broader use of the consensus principle in developing and approving standards. In 1969, the ASA restructured and adopted the name American National Standards Institute (ANSI), and the institute was steadily increasing its efforts to coordinate and approve standards to meet the changing needs of industry, government and other sectors.
[2] In 1970, Congress found “that personal injuries and illnesses arising out of work situations impose a substantial burden upon, and are a hinderance to, interstate commerce”
[3] and approved the Occupational Safety and Health Act (OSH Act) of 1970. As part of the OSH Act, each employer is required to comply with the occupational safety and health standards promulgated under the act. Around this time, many standards were created. Over the years, these standards have been updated as technology improved.

However, one area that has not seen much improvement in some standards, is in the magnitude of force products or parts of the product are required to withstand. Especially when it comes to forces applied by a human user when they stand, step or sit on a piece of equipment. It is no secret that Americans are gaining weight, and in significant amounts. It leads designers to question whether or not the forces specified in standards from 40+ years ago are still
representative of the population and usage situations expected for today’s products.

The chart and graph below show the average weight and 95th percentile weight of the American population at various times between 1960 and 2018. Note how the weights have changed over time. 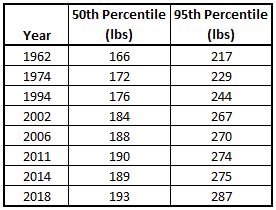 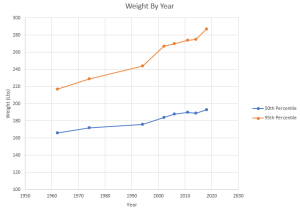 When designing a new product, engineers must account for known uses and the forces that they expect will be applied during its useful life. However, they must also account for uncertainty.
Some of the more common unknowns in design include:
•Specific material properties
•Load variability
•Fabrication fidelity
•Validity of models
•Composition of materials and the effect of variation on properties
•Variations in properties from place to place within a bar of stock
•Effect of processing locally, or nearby, on properties
•Effect of nearby assemblies such as weldments and shrink fits on stress conditions
•Effect of thermomechanical treatment on properties
•Intensity and distribution of loading
•Validity of mathematical models used to represent reality
•Intensity of stress concentrations
•Influence of time on strength and geometry
•Effect of corrosion
•Effect of wear
•Uncertainty as to the length of any list of uncertainties[4]

With the average weight of Americans increasing nearly 30 lbs and the weight of the 95th percentile American increasing by 70 lbs since 1962, you might expect standards to reflect or accommodate for changes in user weight when updated. However, the results are varied across the board. 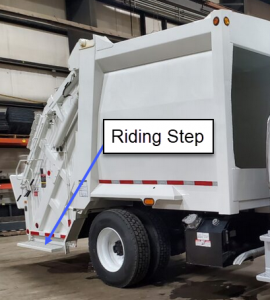 ANSI Z245.1 was initially published in 1975 as Safety Requirements for Refuse Collection and Compaction Equipment. The standard required that “Steps shall be designed to carry a uniformly distributed load of not less than 1,000 lbs.”

The standard was updated in 1984, and the language dictating the strength of the riding step was changed to read “be capable of supporting 500 lbs (227 kg) at the point furthest from its point of attachment.”[6]

According to the anthropomorphic data from 2018, with the amount of weight gained by Americans, a rating of 500 lbs has a safety factor of 500/287= 1.74 on the static load of a 95th percentile user. The static load doesn’t account for dynamic forces applied when users step or jump onto the platform or bumps that the tuck might hit while driving with a user on the step.

In a second example, the United States government provides Federal Motor Carrier Safety Regulations (FMCSR’s) in the Code of Federal Regulations (CFR). These are legal requirements for Commercial Motor Vehicles. In sections §399.201-207, the regulation discusses a number of requirements including those for steps on Cab Over Engine semi-trucks. It appears that the standard was last updated in 1981.

As it relates to step strength, the standard requires that:

“(5) Step strength. Each step must withstand a vertical static load of at least 204 kilograms (450 pounds) uniformly distributed over any 127 millimeter (5 inch) increment of step width.”[8]

With the data available in 1981, this would be a safety factor of 1.96 on the static load of a 95th percentile user.

As it relates to step strength, the standard requires that:

“(5) Step strength. Each step must withstand a vertical static load of at least 204 kilograms (450 pounds) uniformly distributed over any 127 millimeter (5 inch) increment of step width.”[8]

With the data available in 1981, this would be a safety factor of 1.96 on the static load of a 95the percentile user.

In 2018, the safety factor would be 1.56 on the static load of a 95th percentile general population user. Again, his doesn’t account for dynamic loads which would increase the load above the weight of the user.

In 2012, the National Institute for Occupational Safety and Health published an Anthropomorphic study of U. S. Truck drivers. The results of the study show that truck drivers on average, are heavier than the general population. For example, a 95th percentile truck driver weighed 322 lbs at the time of the study.

Using this data, the safety factor on a static load for a 95th percentile truck driver is 450/322 = 1.39. A point of concern considering that dynamic loads could bring the safety factor even lower when the user moves up or down the steps.

This is one of many instances where simply designing to the minimum standard may not be
sufficient for safe operation.

In a third example, the ASTM standard F2291 titled “Standard Practice for Design of Amusement Rides and Devices,” last updated in 2016, requires that “The weight assigned to an adult patron, for design purposes, shall be 170 lbs or 0.75 kN”[9]

It goes without saying that 170 lbs is significantly less than even a 50th percentile American weighed in 2016.

Clearly, not all products or components are designed for the diversity found in our modern society. It is worth noting that even meeting every criterion of a standard can still result in an unsafe product for some users. Particularly when the forces and weight are applied by human users.

That being said, many standards do a good job of accounting for the weights of today’s users. A few of these standards have set a weight limit for the product, or test to a number much higher than the anticipated loads, even for todays users.

As an example, the ANSI/BIFMA 5.1-2011 standard for Office Furniture and Chairs. requires (among other tests) that the seat of office chairs be tested with a force of 2,500 lbs applied for one minute, the load is removed and then applied a second time for a second minute.[10] This is equivalent to a safety factor of 8.7 for a 95th percentile user in 2018.

In a second example, the ASTM F2216-17 for Strength Equipment (exercise equipment) states that “if the machine has been designed for users weighing less than 135 kg (300 lbs), then the maximum user weight limits for the machine or each individual station, or both, shall be affixed to the machine where the user can easily read them.”[11] The standard also requires that the equipment be designed and tested to withstand 250,000 cycles for industrial equipment and 14,000 cycles for consumer equipment with the worst case loads. The worst-case-loads would be determined by the weight limit of the user and the limits and geometry of the specific machine.

In a third example, ANSI A92.3-2014 for Self-Propelled Elevated Work Platforms (aerial lifts, scissor lifts and the like) requires the manufacturer to set a rated working load, and that the rated working load cannot be less than 300 lbs. The standard further requires that all ductile materials be designed with a safety factor of no less than 2 and non-ductile materials with a safety factor of no less than 5 based on the yield stress of the material and the maximum stresses developed within the component when it is operating at it rated work load in the type of service for which it was designed. The standard specifies that the analysis include stress concentrations and dynamic loads.[12]

While accommodating for fluctuating weight in standards might be difficult at first glance, with consideration it can certainly be done. If standards are meant to stand the test of time (which they are), the data shows that they need to accommodate the populations increasing weight gain to maintain a similar level of safety.

While this is all interesting, what does it really mean?

For standard committees, it is time to review those older standards and update them to reflect our current conditions. An exemplary model is the standard for elevated work platforms (discussed above) that require a specific working load and safety factors on the stresses developed in the worst-case loading conditions for their intended use.

As a word to manufacturers, do not use standards as a “how to” guide; use them to determine the minimum requirements, and don’t be afraid to do more if good engineering practice suggests that you should. Know the actual loads on your equipment and apply appropriate safety factors.

For the rest of us, especially if we are up in the higher weight range, pay attention to weight ratings, move purposefully and carefully rather than “plopping down.” While standard writers would like to keep everyone safe, it takes diligence from all involved parties to achieve that goal.

I would like to make clear that I do not wish to suggest that any standards or the committees that produce them are inaccurate or wrong. Heaven knows they have their hands full trying to keep thousands of standards up to date while still creating new standards for all of the emerging technologies. Rather, I wish this article to serve as a reminder that standards are a minimum requirement and not a substitution for good design practice including risk assessments and design safety reviews.